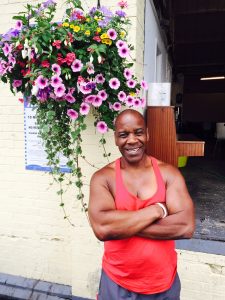 I’m from Tottenham, St Annes Road and I was born in the North Middx Hospital. My dad was American and my mum from Jamaica. My dad was a GI and mum came here in the late 50’s. When I was 9 they split up. When dad left I really missed him and I became uncontrollable. I started hanging out with much older men and they used me to break in to shops and schools to steal. I was caught and put in a children’s home, Northolt Place – I was assessed there and they did a case conference on me. The Judge said there was no reason I shouldn’t go back home, but mum said no – she didn’t want me.

They sent me to Sir Thomas Moore Community School in West Sussex. It was run by the Christian Brothers and it was a pretty violent, abusive environment – we got hit a lot! When I was 11, I went to my first foster family in Crawley. They were lovely people but I kept running away to mum and she kept sending me back. After that I was fostered twice more, always lovely people but I always ran back home and my mum always returned me.

I left Thomas Moore at 17 and ended up in Margaret Thatcher’s ‘Short Sharp Shock Treatment’ – DC in Ashford. I was still getting in to lots of trouble and after DC, I ended up in Borstal. After Borstal I started stealing cars – Cortina’s, Corsairs, Capris, Grenadas – all nice cars. I got knicked and sent to prison.

At 22 I was released from prison and met a lovely girl at a party. We were together 28 years and have 2 beautiful daughters. I was still mixed up with gangs but I also did some legitimate work – mechanic, security, scaffolding. While I was living this gang life I got shot 5 times.  I also got knifed very badly. I’ve got a big scar on my back. They cut me with a dirty Stanley knife.  It got infected and I had to have a big operation.

I was about 35 and after the stabbing, I went to the US to look for my father, my aunt had kept in touch. I rang him and said I needed his help – had a lot of questions to ask. We were driving over Brooklyn Bridge and he opened up to me. He said he’d heard that I was in trouble and he’d come back to the UK to look for me but my mum had prevented him from contacting me. He even tried to apply through the courts but she stopped him. It meant a lot to me to know that he’d tried to find me.  Later, my son went to live with him in the States.

When I got another stabbing there was a rumour I was dead and my sister phoned my dad to tell him.  It seems the shock gave him a massive heart attack and he died in front of my son. My son hasn’t forgiven me or spoken to me since – he’s still in the States

It was difficult to escape from this sort of gang life. At the time I didn’t want for anything and life was good until I tried to leave – I wanted to see my kids grow up.  I’d seen 12 friends die and I just wanted out – a lot of funerals and no weddings. That’s when the trouble started. I was about 49 and I told them I didn’t want to be in it no more. I got my head chopped! I had to leave my family because I was frightened for their safety. I moved into my aunt’s house in Tottenham.  I’m at home at my Aunt’s when 2 gang members visit me – a guy and a girl. They ask me to do something I didn’t want to do – I said I couldn’t help them. The girl asked for the toilet and while I was showing her, the guy put 6 armour plated bullets under my bed.  45 minutes after they left the police arrived and I was arrested for possession of ammunition. They smashed up my aunt’s flat looking for the gun. I pleaded guilty and got 2 years in Pentonville.  On release I had nowhere to go, I couldn’t go back to my aunt’s and although my mum is still alive, I haven’t spoken to her for years. I knew a guy who worked in a Gym so I’d sneak in there just before they closed and leave when they opened up in the morning.  The agencies that were supposed to be supporting me when I left prison didn’t really do anything – luckily I got a referral to Shelter from the Storm. My years of violent, gang life has taken it’s toll – I’ve been told I’ve got PTSD – to be honest, I was only a child when I started. I’m getting my life back together and what I’d really like is for one day to be able to mentor and help other kids escape the sort of life I’ve lived.