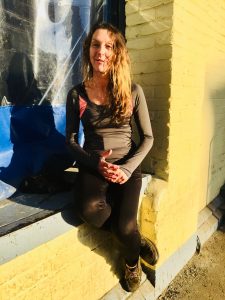 I’m a nomad. I was born in Cambridge in 1964 – my parents were South African hippies and my father came to Cambridge to study medicine.  Cape town in the 60’s was very glamorous – a great liberal, social scene.  My father left us when I was four and my sisters were six and two.  My mother was quite embittered by being left.  She’d followed my father all over the world and then he left her for a younger model.  We moved back to South Africa and my mother went back to nursing to support us – she was a Matron in a Cape Town hospital.

My mother made us very aware that she’d sacrificed her life for us – working all hours to send us to private schools.  When I finished school, I worked as a nurse to pay for my own University place studying psychology, but I dropped out.  I had no support structure and I lived with street people and squatted in Cape Town. When I was 23, I came to London, became a Punk and squatted in Clapton.  I was doing a lot of performance and dancing and travelled back and forth from Jo’burg to London. I had a baby at 27 and another at 31 – I looked after them as a single parent until they were adults.  Life in Jo’burg was pretty extreme – violent and hard.  In 2004/5, I wrote to Tony Blair asking him for help to get away from South Africa. Got a polite reply, but no actual help.

I’d been managing to support us all with work as a journalist, but by 2010 I was out of work.  In 2011, I started my PHD – the kids had grown up and I was on my own.  I sold all my possessions and started travelling across Africa.  My PHD was about the psychological effects of HIV on women.  I would work for a few months then continue my travels.

In a way, I made myself homeless – living in my car in UK and my tent in Africa.  NGO’s in Africa were always very supportive and often gave me paid work.  I lived this nomadic, borderless life, never really feeling at home anywhere. Up to the end of 2016, I lived in my car in Cape Town near to my kids, but  I’d just had enough, so I sold my car and came to UK in January.  I didn’t have a Cent!  I spent the first weeks on the streets around Victoria.  It was bitterly cold and I got ill.  I was told that to get help, I had to be ‘spotted’ on the streets like a wild animal. I went to the Passage in Victoria, but none of the street outreach helped me get a bed.  I met an old friend and Sofa surfed for a while until I somehow got a space in a Churches Winter Shelter.  When the churches shelter closed down I followed some homeless Polish men to a park in Leyton Marshes and I camped there with them.  I guess I thought I’d be safer with them, but they robbed me of everything – my tent, my laptop, my clothes, my sleeping bag.  Luckily, I always keep my ID on me.  That Sunday I went to a Soup Kitchen in Walthamstow.  There was a Christian guy there, a Zimbabwean, and he said I could stay with him.  He was a fundamentalist born again Christian.  This guy became quite abusive and controlling.  He tried to convert me and told me my Catholic godmother was a devil worshipper.  I’d had enough and went to St Mungo’s and begged them to help me.  This time, after three months of asking, they referred me to Shelter from the Storm.

At Shelter from the Storm, I found a place of peace where I didn’t feel hunted, where I could get some sleep and headspace – one of the most underrated human needs. SFTS helped me find my own place.  They’re so lovely at the shelter, but I need my own space – somewhere I can play a little music and have a little dance.  I chose my life and I don’t regret it.