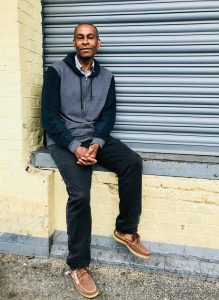 I’ve lived in England for 50 years. I was nine when I travelled from St Lucia with my brother to join my mum and dad in the UK. Dad was a tailor and mum worked as a cook in an army barracks in Praed Street.  All four of us lived in one room in a house in Minet Avenue Harlesden. I went to Essendine Primary School in Maida Vale and then on to North Paddington Secondary. I enjoyed school and I did quite well. I was good at sports and I was in all the teams, athletics, football, but my favourite was cricket – I was a fast bowler.  We won lots of competitions and we were pretty feared by other schools. I got a few O levels then left school to start my first job as an apprentice copier engineer. I did that for a few years and then got a job selling hand-made Persian carpets in Westbourne Grove which lasted 7 years.

I got married in 1992 and we bought our own house in Edmonton Green.  I was doing ok, I had my own business importing exclusive Danish Dyrlund furniture. My wife worked on a project with teenagers.  We had two children and our life was really very nice and very normal.  We were together for 10 years and when we finally separated, I left the house to my ex-wife and children.

In 2000 I met my second partner and we had 5 children together. We decided that I should do the bulk of the childcare. We were very happy as a family for 12 years but sadly we then separated. I stayed with my sister and her son for about 4 years in her Westminster Council flat, but when she died, I was homeless. I managed to get a private rented studio in Haringey – I was there for three and a half years when the landlord issued section 21 notices to everyone in the house and we all got evicted.

This was August last year. I was on the streets for a few days when I met an outreach worker at a soup kitchen who referred me to Shelter from the Storm. I was only supposed to be here for a night. I viewed a property which seemed OK, but when I went back to Haringey Council I was approached by someone from the Home Office – I think he was based there at the Council offices. He said they couldn’t help me as I didn’t have proof of the right to reside and I wasn’t eligible for Housing Benefit. I didn’t really understand what he was talking about. I’d lost my passport with my indefinite leave stamp, years ago. To regularise my situation, I’ve had to provide all sorts of evidence of my life in the UK and get copies of my Birth Certificate from St Lucia – it’s taking ages and I’m still homeless 8 months on – waiting for a decision from the Home Office.

If I wasn’t able to stay at the shelter, I don’t know what I’d do, I’d be on the streets again. I walk around or sit in the library most days. Being homeless makes it difficult to have contact with my children.
I’m in Limbo. I can’t work, I can’t get anywhere to live, I have absolutely no contact with anyone in St Lucia. I just hope the Home Office mean it when they say they’re going to make it easier for people like me. But, to be honest, I just don’t know what else I can do to prove I’ve lived here since I was a child and I’ve worked and paid tax most of my adult life

All my life believed I was British and I pray that I can spend the rest of my life it in my own home and maybe find a nice job.