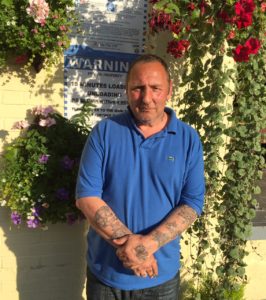 I was released from prison on 14 August 2016 with £46 in my pocket.  I bought a packet of fags and a bus pass and the money was gone.  I slept in Finsbury Park, Old Street subway, on the busses, I found an unlocked garage on an estate that did me for a bit.  I got moved on by the Old Bill a few times.  My broken relationships with my family meant that I’d burnt all my bridges and they weren’t prepared to have me back.  I’d managed to keep myself clean inside, but it was a daily battle staying straight while I was rough-sleeping.  I’d bump into people I’d known back in the day who offered me gear; trust me it was really hard to say no…but I did.

I was born in 1965 in Violet Road Stepney – within the sound of Bow bells – proper cockney.  When I was 5 me, mum, dad and nan sold our house and moved to Tottenham.  I had a difficult childhood, I was hyper and mum and dad just couldn’t cope.  Dad used to beat me.  When I was 8 they sent me to Bylands, a council funded boarding school in Basingstoke.  I left at 11 and tried moving back home, but it just didn’t work out.  I was put in a variety of children’s homes and assessment centres.  I kept running away so they put me in a secure unit in Redhill.  None of it worked.  At 14 I started getting into trouble and ended up in a detention centre – at 15 I done a Borstal and came out at 16 and a half.  I was mixing with all the wrong people but they were the only people I knew.  I was doing armed robberies, security vans.  So, for 2 or 3 years I was living what they call the high life – drinking, clubbing, flashy cars holidays –  Then…I got caught and sent down for 10 years, I’d just turned 22.  I was disruptive, wouldn’t toe the line, I guess I was bitter and twisted and angry.  They kept moving me around prisons all over England and I lost nearly all my remission.  I had just turned 30 when I eventually got out.

I settled down, got married, got a job as a van driver had a couple of kids, a boy and a girl.  I was still living in Tottenham and managed to stay out of trouble for 10 years.  Then, when I was going through a bit of a bad patch I did something really stupid.  I went out and robbed a drug dealer and I got caught.  I got 3 years.  I behaved myself this time, I guess I’d at least learned something and I only did 18 months.  On release I settled down and got another job.

In 2010 I turned 45 and that’s when my life fell apart around me. I was working hard and I didn’t see it coming.  We must’ve grown apart but I hadn’t really realised and my wife kicked me out. The drug dealing people I’d known all my life were still all around me.  Whereas before, although I’d smoke a bit of cannabis, I’d always refused offers of hard drugs, now I was in this rotten place, alone without my family and I just though what the heck, why not?  To be honest, it took the pain away.  At first it was free, but then of course I had to start paying!  I was using whatever I could get – Crack and Heroin mostly.

The last 6 years have been a constant hellish battle.  I’ve been sofa surfing, rough sleeping but always using.  My children disowned me because of my drug taking.  I’d always told them not to use drugs and here I was – a junkie!

In the last 6 years I’ve done 2 more prison sentences, a 4-year stretch (I did 2) and the last one a 12 month of which I served 6 months.  I cleaned up in prison this last time and became a peer mentor for other cons with drug problems.  I think I’m good at helping other people with drug issues because I’ve been there – I understand what they’re going through.  I really surprised myself how much I enjoyed helping others.

An SFTS volunteer has arranged for me to become a ‘Street Buddy’ with an outreach team trying to connect with hard to reach substance misusers on the street.  I’m really looking forward to it!

SFTS have helped me access shared accommodation in Tottenham and I’ll be moving in soon.  I feel very sad about what a mess I seem to have made of things but in the last few weeks I’ve started making contact with my kids.  Things are certainly looking a bit better and Shelter from the Storm has definitely helped me move on up! 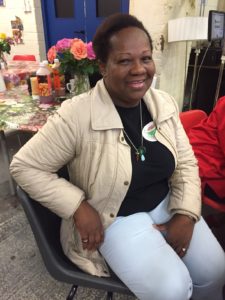 My Experience with Shelter from the Storm was unexpectedly great! I never thought that being homeless we could have such a welcome from the overall team, particularly when one was so down and disappointed about the outcome of housing issues.

Let’s start with the most obvious! Food at the shelter is a delicious meal and a delicious breakfast. Even on Sunday, ordering a breakfast (on Sundays full English Breakfast) is like in a restaurant.

Hygiene is very good, as when we arrive in the evening we get a clean place with roses on the tables to chill from the long day spent out.

Communication is always jovial with the team which we pass on to each other among the homeless. Homelessness is not what any of us expected and we respected each other’s privacy even sometimes when it’s difficult to do. If in the future I became rich, I would myself give to Shelter from the Storm, because I could see for myself where my money would go and just what a good charity group can achieve! It all started to go wrong when my marriage broke down. I had nowhere to go so I was sleeping on the streets. My health really suffered and I started to become depressed. That’s when I began taking drugs. Things just seemed to get worse and worse. I did manage to hold on to my job though which was really important to me.

I first came to Shelter from the Storm in August 2014 after I had just broken my leg. I had a bed to rest in that was warm and there was food. I was given time for my leg to heal, I was then able to start working again. Things haven’t always gone to plan for me at the shelter, but I’m finally moving out now into my own place. I hope that everyone who is suffering from homelessness can get the same chance as I did at Shelter from the Storm. All of my gratitude goes out to all of the volunteers – thank you.